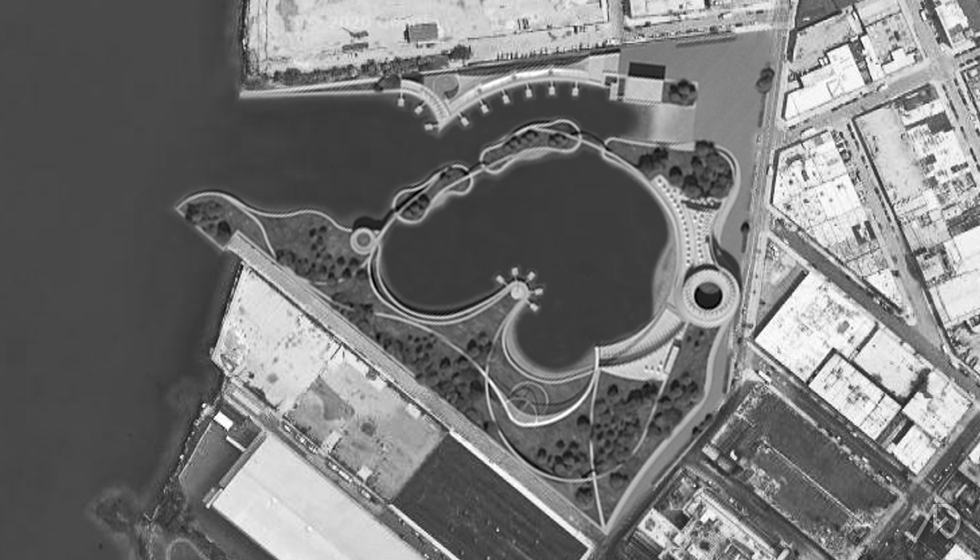 This boathouse design was a submission for an ideas competition sponsored by the East River Kayak Club located in Greenpoint (Groen Hoek) Brooklyn.

The proposed 28-acre waterfront site has direct access to the Bushwick Creek Inlet and the East River; an ideal location for the new boathouse.

The boathouse is to be used by the Kayak Club and should have space for water access (boat launch), boat

storage, and any programming necessary to the design.

Our proposal includes items such as a community center, café, walking paths, a beach area, picnic areas, and an outdoor amphitheater to name a few.

This submission was a collaborative process between Kevin Kleyla and Arthur Gilmore.

Without the great support of AG and the Gilmore Group, this project would not have reach completion.

This project began by exploring bending and molding of materials used in the construction of boats; specifically smaller crafts such as kayaks and dinghies.

A key source of inspiration was the kayak, whose form remains extremely minimal while protection if provided by its “fit” to the human body.

In developing the design, the production of study models provided most beneficial.  The site was initially

modeled by testing the elastic properties of small strips of material.  The site was constructed using only curvatures which did not break or tear the material – in essence, making it become a material specific site.

Once this process was set as a defining action, the site was modeled as concrete paths, each with a destination and its own character.  All paths were constrained by their own

The ground plane was then created in order to connect and enclose the site.  The site now acts as a molded kayak, surrounding and inclosing those within it. 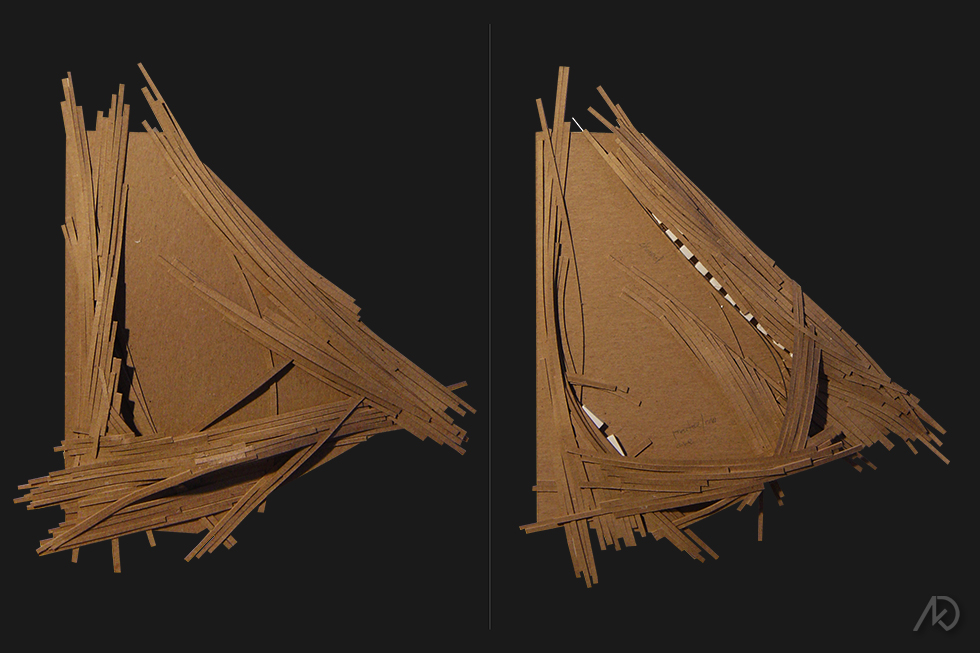 The models were built by using thin strips of material – bending them to their limit in order to create large seeping curves.  These curves defined the site and basic layout of key components.

The study models helped to inform the 3d model which became the driving force behind the design.

In 3d I was able to fine-tune the walking paths and their relationship to each other.

My favorite areas are the “bridge” moments where a path soars over another.  This was initially realized as a possibility from the study models.

I wanted the forms or paths to sweep above and below each other – helping to unify the site as one object. 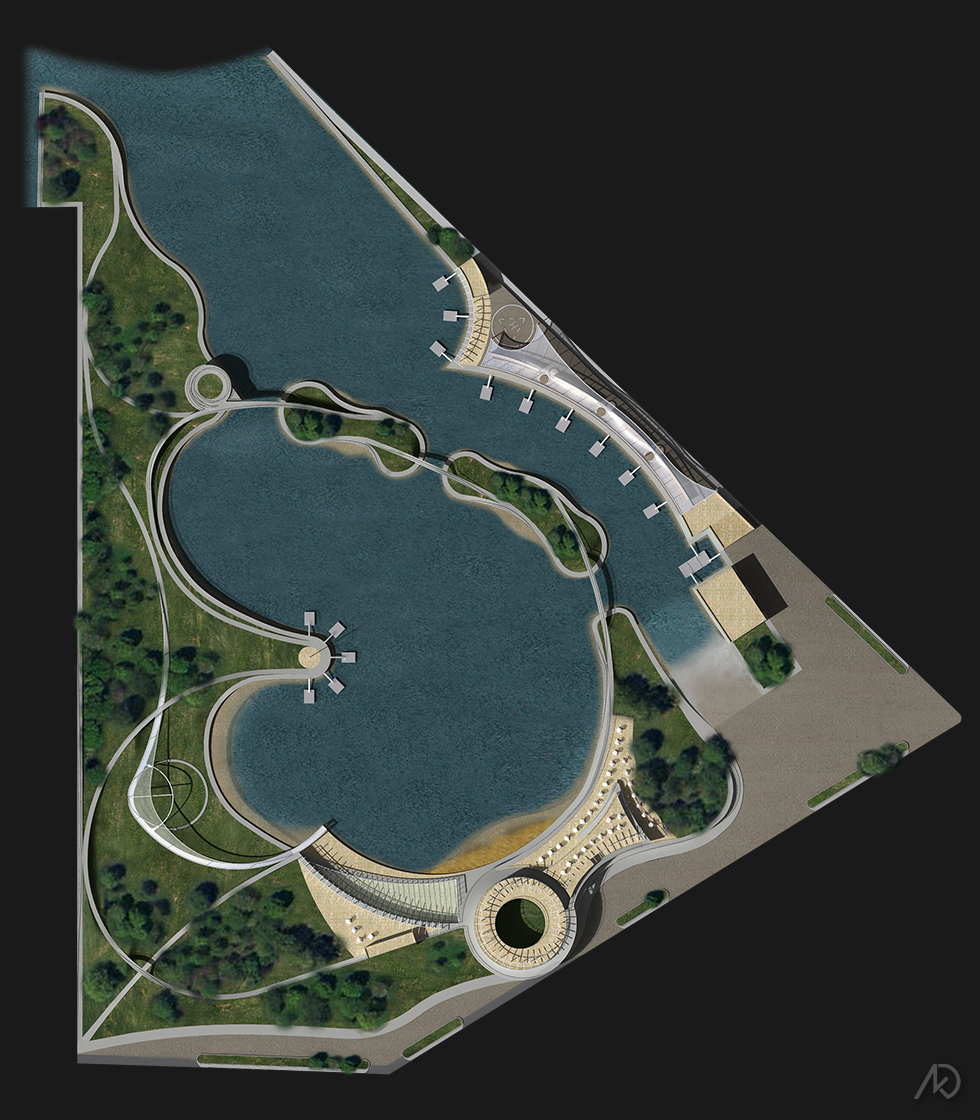 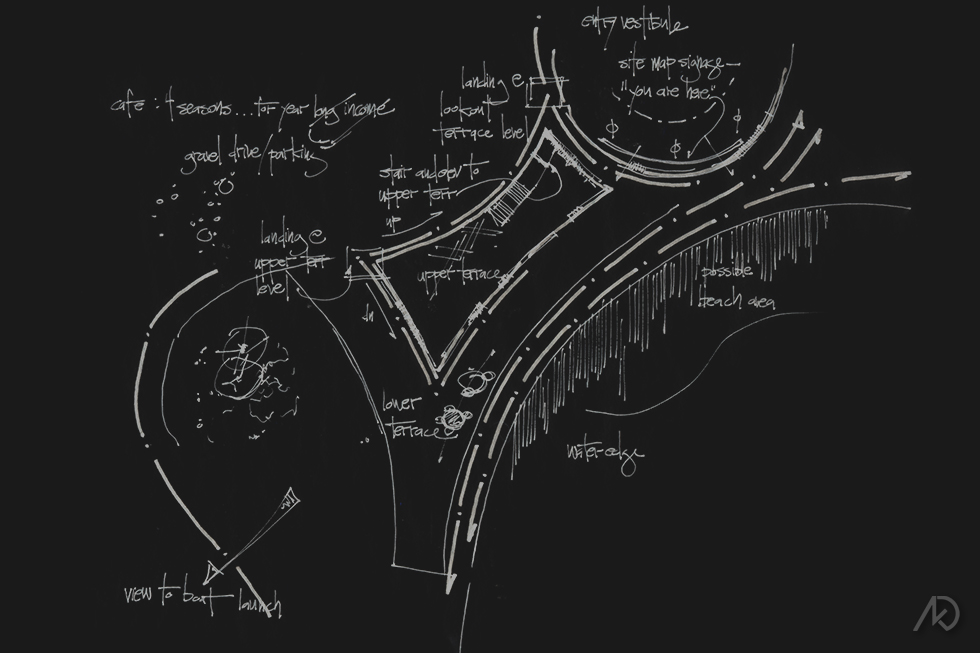 The exterior perspectives show the site from the walking paths and observation platform.

From the higher paths one can see the two large islands which act as a buffer from the East River while forming a private lagoon for the Kayak Club.

The islands make great picnic areas and places of rest for tired kayakers.  Each island has a small beach

access so they can be enjoyed by pedestrians from the walking paths or by kayakers from the water.

Most of the water’s edge has soft beach access areas and tall grasses and vegetation to help carve-out private spaces for the users.

A trip to the 28-acre site would not be complete without a visit to the top of the main structure.  From here one can view the entire site from under the pergola.